Being the third installment of my How to Draw Comics series.

There is no “right” way to create your character. For many creators, the process is a natural evolution from an initial idea to a fully fleshed-out character. That starting idea could just be a funny doodle in a sketchbook, or beam in as a “wouldn’t it be cool?” idea while walking down the street. No matter where the idea comes from, the magic comes from playing around with the character to see what makes them tick, whether it’s writing the ideas down, drawing character sketches, or just daydreaming about that character in a quiet moment. The more you know your character, the more likely a story idea will come from knowing who they are, what they like and want, and what their history is.

To begin, we take a look at a case history. (Or you skip ahead to the character creation part.)

For Paradigm Shift, the characters definitely preceded the story by a long mile. Kate & Mike were originally characters in the tabletop role-playing games I played in way back in the dark ages of the early 1990’s, when I was in high school. Both were originally created for the superhero RPGs “Heroes Unlimited” and “Ninjas & Superspies” by Palladium Books, using randomly generated character tables and dice rolls—with some house rules in effect. The original versions would barely be recognizable to readers today, in that many important details about their powers and skill sets were very different. However, Kate’s powers were still the result of an experiment gone wrong, though they were more of a mis-mash at the time (she had “Adhesion” like Spider-man, which makes zero sense!) And Mike had energy super powers for no reason at all. However, they were both originally police detectives, and that’s where the seed of the story really got started. Both started out as character sheets for the RPG, and the first “character designs” were really just character portraits on the sheet.

In fact, Kate & Mike where the inspiration for my first attempt to draw comics in high school. I was a huge fan of detective shows like “Law & Order” and buddy cop action films like “Lethal Weapon” at the time, and somewhere along the line the idea came to me to have my detective with werewolf-like powers investigate a series of killings that she herself could have committed.

Inspired by Eastman and Laird’s TMNT comics, I started drawing the first a few pages of what would become an 8-issue series of a comic called “VISTA” that my friends and I created. However, we took it into full superhero territory and the werewolf killings plot simply became Kate’s origin story as a prelude to joining a whole super team filled with characters from our role-playing games. My friends Jamie and Tyler wrote scripts, and I would draw them (and occasionally write stories about Kate in particular.) It was all very X-Men meets Avengers, and we shamelessly aped our favorite comic creators. At this point I was looking a lot at Jim Lee’s work in X-Men and Todd MacFarlane’s Spiderman, along with a number of other artists who went on to found Image Comics when they left Marvel. I was also reading indy comics like Dave Sim’s Cerebus and latter-day TMNT.

But that mountain of comics I drew in high school never saw print. The only people who ever read them were my friends and the portfolio reviewers at the university art programs that I interviewed. However, despite those stories never finding an audience, one of those portfolio reviews—at Millikin University in Decatur, IL—resulted in getting me scholarship to a four-year art program. I stopped drawing comics after high school after a brave, but soul-crushing visit to the 1993 Chicago Comicon, where I took my portfolio around to be reviewed and was unsurprisingly told to work on my anatomy and storytelling (which in retrospective, I certainly did, but I took it hard). However, the characters, and that initial story idea that came out of Kate’s origin stuck with me.

In college, I enjoyed watching anime with my friends. The stuff coming from Japan was far weirder than the “Japanimation” shows I had grow up with as a kid like Speed Racer, Voltron (especially the spaceship one!) and Robotech. I first saw AKIRA at the tail end of high school and it took the top off my little eighteen-year-old head. In college, my friend Steve worked at a video store during the summer and brought back sample tapes to school to share with us. In this way I saw a bunch of first run anime classics like Ranma 1/2, Project A-Ko, Urusei Yatsura, and Riding Bean. I was hooked from the start, not only because I liked the art style and the fact the sensibilities were far removed from what I had come to expect from American stories, but the fact these were science fiction and other genre pieces done in animation. Bubblegum Crisis, Dominion Tank Police, Gunbuster, Nausciaa, Ghost in the Shell, Giant Robo, Macross Plus—it was inspiring, and I couldn’t get enough. I took to drawing my friends’ portraits “anime-style” and doing the same for RPG characters, just for fun.  By the time I graduated in 1997, manga was beginning to flow into the US, and creators like Masamune Shirow (Appleseed, Ghost in the Shell) and Kenichi Sonada (Gunsmith Cats) caught my attention immediately.

Over the next several years through college and out into the working world, Kate and Mike stuck with me and that initial story idea grew and evolved. I found new inspirations from novels, movies, anime, indy comics and manga. I also continued to play tabletop RPGs with my friends, and at one point decided to reboot Kate & Mike as anime-styled buddy-cop police detectives in a Bladerunner-esque near future low-powered superhero setting. Kate’s powers were retrofitted to more of a down-the-line berserker lycanthrope and Mike got turned into a martial artist. We only played the game a couple of times, but I thoroughly enjoyed the new version of the characters—especially the in-game buddy cop snark. So, when I returned to try my hand at comics again for what would become Paradigm Shift, I knew exactly the story I wanted to tell, because at this point I knew the characters like old friends.

While working in a web design job in downtown Chicago, the final piece of the puzzle fell into place for what would become Paradigm Shift. I had the characters. I had an idea for a story. While walking the streets of Chicago, I fell in love with the city and started seeing scenes playing out in the places I knew around town. Suddenly, I had a setting, and inspiration struck. I started jotting down the ideas for Kate & Mike’s story while commuting on the train every day. At lunch, I doodled character sketches on Post-It notes and stuck them to my computer.

I rolled up character sheets for them on the weekend and drew character portraits on them like old times, but this time knowing I wasn’t going to *play* these characters—I was going to *write them*. I compiled an outline of the first book and took a friend to coffee to show it off. After getting an enthusiastic thumbs up, I started drawing the first scene of the book before I’d even finished scripting (not something I really recommend, but…) and the rest is history.

In my case, my characters had a long road from initial idea to eventual debut in a graphic novel.  They went from RPG character to comic character, the back burner to revival as RPG character to comic character over the course of about seven years. Not everyone has that sort of time these days. You sure don’t. 😉 Since starting my comic, the characters continued to evolve visually and become more internally nuanced, and the same will happen with yours. The important part is just to pick a starting point.

Here are some ideas one where to start:

It’s also possible to reverse-engineer the process of creating a character if you have a story premise as a starting point. You can take pivotal character in a bigger story idea for a story and figure out who they are and what got them into that situation. I’m working on a new graphic novel called FreeMarsGirl (more on that another time) that started out this way. I had a cool idea for a story about a computer hacker who unintentionally starts a Martian revolution, but didn’t really know who the characters were at first. It’s taken some time, but they’ve finally shown themselves.

If you’re starting from a plot or world-building standpoint, here are some things to think about: 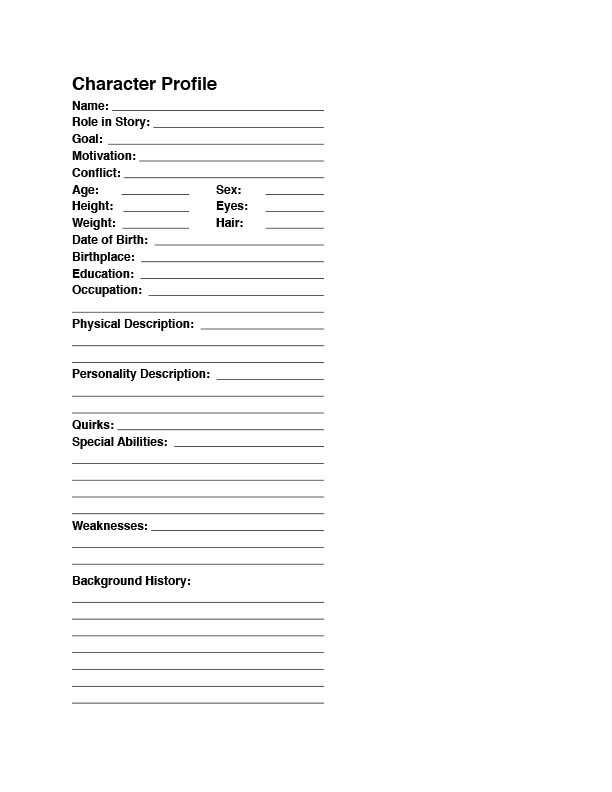 I’ve also created a quick cheat sheet, loosely based on those old role-playing games that you can use to get started (complete with room to draw a sketch).

Another thing to consider as you get into your story are some deeper traits that drive your character: Goal, Motivation and Conflict. These are “engines” that get your character to take action. In some stories, these are easy to nail down. For a superhero story, the Hero’s Goal might simply be “Defeat the Villain”; the Motivation would be “Save the City!”; and the Conflict would be “Villain takes the Hero’s family hostage”. However, the more nuanced the story you decide to tell, the less clear these items will become. If you can get an idea what these things are, you will go a long way to understanding who this character is and what she’ll do in your story.

As an example, here is how Kate developed for Paradigm Shift. As the main character, main thrust of the story revolves around her developing supernatural abilities which put her in direct conflict with her identity as a police officer. As a combination action/mystery, her role as protagonist is pretty clear, as is her Goal, Motivation, and Conflict.

Role in Story: Protagonist
Goal: Discover who or what is killing people in the back alleys of Chicago and stop it.
Motivation: It’s her job—she’s a detective.
Conflict: She’s developing weird abilities and having dreams connecting her to the murders.  Did she commit the crime?

Weakness:
Anger management problems get her into trouble
Not entirely in control of her powers
Uncontrolled Transformations – blacks out when transformed and has no memory of the experience when returning to human form

Background History:  Kate always wanted to be cop, in part because her father was a well-known violent crimes investigator who had dedicated his life to the pursuit of justice—until he died suddenly when she was 15.  After already losing her mother to cancer four years before, she went to live with her older brother while she finished high school. However, after narrowly avoiding becoming an assault victim herself from one of her brother’s friends, she solidified her intent. Her reaction was one of rage rather than fear, and from that point on she immersed herself in physical activities—kick boxing, gymnastics, track, hockey, etc—to build her self-confidence so she would never again feel ‘weak.’ Four years after graduating from high school, she earned a criminal science degree with top honors and immediately joined the Chicago police force. After serving only two years on the force, she earned the rank of Detective after cracking a difficult murder case with Detective Mike Stuart.  He became her partner after her promotion, and they became a smart-ass dynamic duo that quip and joke their way through an often stressful and traumatic job. Together, they keep the department on its toes as both its greatest assets and biggest embarrassments.

Hopefully this peek into the origins of my comic will provide you with ideas and inspiration to find your own unique story and characters.

Next time we’ll dig into character design and using figure drawing to help refine and inject some life into your creations.